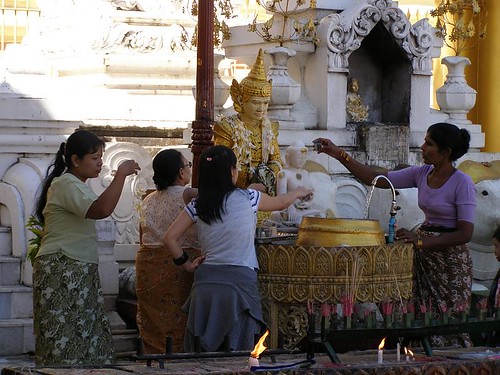 Ever wonder what these people on Shwedagon Pagoda are doing pouring water on Buddha’s statue? This custom is not only seen on Shwedagon but also on many other pagodas in Myanmar. You might think this is a simple offering of clean and cool water to Lord Buddha in an act of merit making. However, there is a deeper meaning to this simple act which is deeply rooted not in Buddhism but in Indian Brahman belief.


Buddhism does not belief in the influence of one’s time or day of birth on his later life. What influence on his life is his karma, good and bad things he did in the past and does in this life. However, most Burmese Buddhists are strong believers of Hindi Brahman idea of astrological influence on a person’s life. They belief especially in the great influence of a person’s birth day on his later life. This belief was actually brought into Burma by Hindi Brahmans who worked as Royal Astrologers in the Burmese Royal Courts, thus exerting great influence over the decisions of the Burmese kings. Although this is contrary to the teaching of Lord Buddha, Burmese were quick to incorporate this idea into Buddhist teachings. They built the monuments for planet gods that govern the days of the week into the structure of the pagoda. As a result, Burmese pagodas always have eight planetary posts surrounding the main stupa structure. These are built at eight directions to represent eight days or planets of a week, on in each direction. (North, South, East, West and another four posts in between – see article on Eight Days a Week).

You might wonder what is the use of building these planetary posts into the pagoda structure, apart from the representation of the eight planets. These are more than mere representation. As most Burmese believe in the great influence of the day they were born on their life, they always try to do any important thing according to this day. They choose their name according to their day, they they choose the name of their business according to this day, they get married to a person whose day is friendly to their day. So, when a person goes to a pagoda to pay homage to Lord Buddha, they also do merit by offering water, flower, incense and candle light at the planetary post that governs their day. Thus a Sunday born would do this at the planetary post of Sun, while Monday born will do the same thing at the planetary post of Moon. This is very important for a Burmese. As Saturday is considered by most Burmese as an unlucky day, you will see more people at the post of planet Saturn than at other planetary posts on any pagoda.


Another importance of the planetary posts is in astrology. As Burmese believe in yadayar, a belief that one action will have a great influence on another event which is not related to the first act, they try to influence the outcome of their life events by doing some act. This usually involves some kind of merit making at the respective planetary post on a pagoda. This is strange for foreigners but for a Burmese, this is a very important act, and has to be done properly.

As this is an important cultural belife, never question or laugh at this to a Burmese friend. At best he will try to force a smile; at worst he might get angry. Even if you try to explain him the fact that this is nothing to do with Buddhism, most Burmese do not realize this and will be offended. After all, this is what he has been told to believe sinch he was young.