I still remember the first time I brought my girlfriend to Burma. As soon as she saw the Rangoon International Airport, she suddenly exclaimed “Oh, it is a temple in the airport”. It makes the Burmese passengers sitting in front of our seat into uncontrollable laughter.

Well, she was partly right. The Yangoon International Airport is a strange airport building. Its design and structure is the result of repeated, poorly planned renovations and constructions, mixed with poor maintenance. Built in 1947, shortly before the independence of Burma, by Calcutta Metropolitan Airports Authority, it was considered the best airport in South East Asia. However, with poor maintenance, neglect and poor planning, the airport together with the airport building became dilapidated and antiquated.

In 2003, Myanmar Government launced a project to modernize the airport and the airport building as well as to extend the runway. The new extension and modernization pland was  designed by the Airport Development Division of CPG Corporation of Singapore and constructed by Asia World Company of Myanmar, the runway was extended to a new 11,200 feet length. A new international terminal was also added to handle 900 departing passengers and 900 arrivals simultaneously. Overall design and detailing was carried out to meet IATA service standards and to comply with ICAO safety and security standards at a cost of SG$30 million.

Although the addition of a new international passenger terminal improves the standard and capacity of the Yangon International Airport, the overall design of the airport is still in a strange “Burmese Temple” design. The old, original airport built in 1947 was on the left (view from the airfield). This is an old and worn out building. On the right of this building is the so called “Burmese Temple”, originally build for the Official used. This was then added with a new International Terminal on the far right. The old, the temple and the new modern combined together give the Yangoon International Airport a strange look and feel.

The arrival process is fairly quick. The immigration area is only a short distance from the arrival hall, thanks to the small terminal. There are separate immigration desks for foreigners and returning Myanmar citizens, with foreigners on the right side of the immigration area. Due to low foreign visitor arrival, the immigration process for foreigners is very quick, with only a short queue. For foreigners, the immigration officers are generally warm and friendly. After the immigration, you go to the luggage claim area which is just after the immigration area. Here, the waiting time is quite slow. I don’t know why but it may takes up to half an hour to get your luggage coming out of the conveyor belt. The custom area is in front of the luggace claim area. There are usual two channels, with green for nothing to declared. The custom officers are usually friendly. Normally, if you are carrying only a few small luggages, they won’t check your luggage. For me, most of the time they never ask to see inside. Even when they ask to open the bag, they never checked thoroughly. This is also quick.

Once you are out, there is a waiting area for the relatives and friends. If you want to hire a taxi, you can ask at the small desk near the exit of the building. 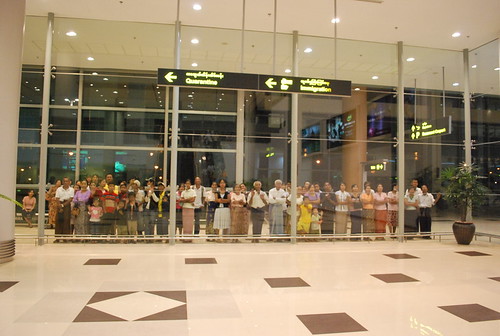 One thing I don’t like is the slow process fo the luggage. It takes a long time for the luggages to come out of the conveyor belt. The space is also a little small for all the passengers. Apart from that, the overall arrival process is fairly quick and straight forward.

Compared to arrival, departure is a little bit more clumsy. The chick in area is sealed and once you enter the area, you cannot go out any more. However, this area is also covered by glass walls and can be seen from outside, so you can still see your friends and relatives from inside. 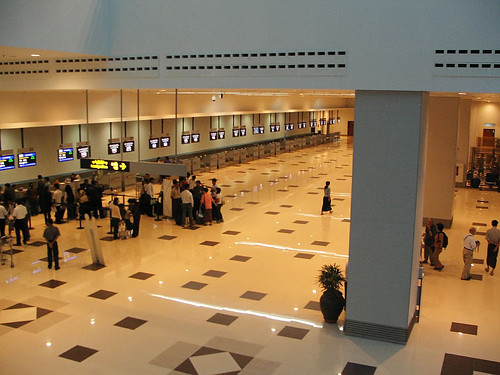 One thing that the international travelers should be remined is that they have to pay airport tax before they can check in at the counter. Many international travelers do not know about it and it causes inconveninece when you are a little but rush. The counters are in front of the check in area, and the queue can be long so go to this area as soon as you arrive. Show your passport and the air ticket, and pay the airport tax (US$ 10). After you pay the airport tax, get the receipt and rushed to the check in counter. There, you will be asked by the airport porters (in blue uniform) if you need any assistance. If you are sure you are not carrying any excess luggage, there is no need for their assistance. (They will ask for pocket money if you ask for their assistance so be very careful). Sometimes, the provide assistance without saying anything. Don’t mistaken it as a usual Myanmar friendliness seen elsewhere. However, if you are carrying excess luggage, their assistance can be very helpful. Simply tell them that you are overweight, and they can handle a few extra kilos! Don’t ask me how they do it.

After this, go up to the second floor for immigration. The process is quite fast for foriegners, as there is a short queue for foreigners. After this, go to the departure longue which are quite modern and clean. If you want, you can have a cup of coffee at the cafe on the second floor (before you enter the departure longue, as you cannot leave this area once you enter). 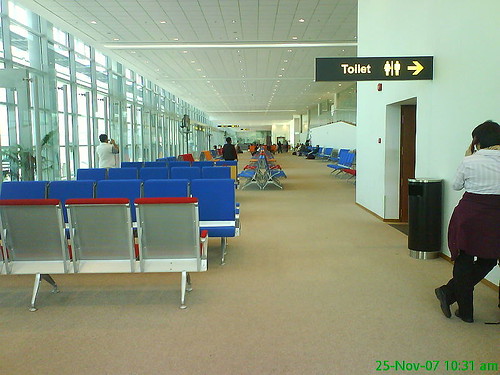 The domestic terminal is the old original building built in 1947. The terminal is quite old and dirty, with poorly maintained toilets. (Sometimes, there is no water in the toilet!) The check-in is usually fast, but the luggage handling is very poor, especially on arrival. There is no conveyor belt and the luggages are piled up on the floor of the arrival hall. Passengers have to go and look for their luggage by themselves. Before you leave the hall, they security will check your luggage tag so don’t throw away your bording pass and the luggage tag.