Mrauk U was the old capital of Rakhine (Arakan) Kingdom. Established in 1431 by King Min Saw Mon, the city grew to a population of 120,000 in 16th century. It was a major trading port in the Bay of Bengal, and was always crowded with foreign traders – Europeans, Arabs, Indians, Mon from Hansawaddi, Burmese from Ava. Hundreds of trading ships, on their way from Europe to the exotic eastern trading cities like Java, were docked at the Rakhine port of Mrauk U. At its highest state, Mrauk U controlled half of Bangladesh, including Dhaka and Chittagong, half of lower Burma and current Rakhine (Arakan) state. However, the hay days of Mrauk U ended abruptly in early 19th century when it fell to Burmese invasion from Ava.

There are a large number of pagodas in Mrauk U. Although less in number compared to Bagan, the unique style of the pagodas of Mrauk U are a testament to the glorious history of the Rakhine kings who built them. Pagodas in Myanmar can generally be distinguished by their colour; the red pagodas of Bagan, the whitewashed ones in Sagaing and Mandalay, and the darkened, green-tinged examples in Mrauk U.


There are more than 70 temples, stupas and other ruins around Mrauk U. Some of the famous ones are listed below.

Shit-thaung is a famous temple in Mrauk U, which means ‘Temple of 80,000 Images’, and is also known as the ‘Temple of Victory’. It is the most famous temple in Rakhine. The temple was built in 16th century by King Min Bin to commemorate his conquest of Bengal. Located on the western face of Pho-khaung Hill, adjacent to the Andaw-thein temple, and north of the Royal Palace. It is a central bell-shaped stupa, surrounded by four smaller stupas at the corners, and a number of smaller stupas surrounding them – a style typical to all Burmese pagodas.


Here is an excerpt from a travel story from Myanmar Times last year about a trip to Mrauk U.

“There are the four dark walkways in the interior of the pagoda – I had to donate some money to run the generator, which gives me an hour to explore the damp, maze-like passages that are covered with murals depicting the jataka stories. There are no other visitors besides the children playing hide-and-seek. I can only wonder how the artisans could have completed their beautiful works in such a dark place.” 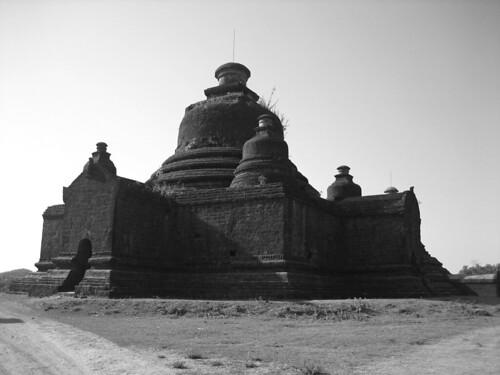 Htukkanthein  (Dukkhanthein) Temple (Cross-Beam Ordination Hall) is another famous temple in Mrauk U. Although it is a ‘thein‘ (Ordination Hall), it is one of the most militaristic buildings in Mrauk U – built on raised ground, with a single entrance and small windows. Built in 1571 by King Ming Phalaung, the building was thought to have been used as refuge for Buddhis religious order during the time of civil unrest.

Andaw Thein is where the tooth relics of Lord Buddha was enshrined. It is situated adjacent to the Shitthaung Pagoda. The shrine is an octagonal structure of pure sandstone, with two internal concentric passages.

Lemyathnar Pagoda (Four Face Pagoda) is situated about 150 feet north west of Dukkhanthein Temple. King Minsawmon, the first king of Mrauk-U Dynasty, built it in 1430 A.D. It one of the five pagodas built at the beginning of the establishment of the city. 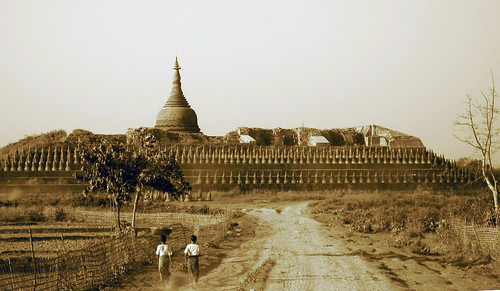 Koe-thaung Pagoda (Ninety Thousands Pagodas) is another magnificent temple of Mrauk U. Built by King Mintaikkha in 1553, it is the largest structure in Mrauk U. The upper structure has already disappeared now, but the lower structure still stands. It is very similar to the Shitthaung Pagoda. According to history, the pagoda was built in six months time due the the advice from the royal astrologers as yadayar. As a result, it was inferior in quality compared to other pagodas of Mrauk U.

Nowadays, Mrauk U is a major tourist destination in Myanmar. It is accessible from Yangon (Rangoon) via air and by land (although the condition of roads to Mrauk U makes it unpractical for the tourists to go there by bus). All the domestic airlines fly to Sittwe, the capital of Rakhine State. From Sittwe, visitors can take either boat or bus to Mrauk U. The trip is an 80 kilometer, 6 hours journey.

You can go to Sittwe (Sandaway) in Rakhine (Arakan) State by bus directly from Yangon. Buses to Rakhine leave at the Highway Bus Stations at either Aung Mingalar Bus Terminal in North Okkalapa or Dagon Ayeyar Highway Bus Terminal in Hlaing Tharyar Township. The bus will pass Mrauk U on the way, so you can drop there. You can also take a bus to Taung Goat which also passes Mrauk U. The name of the buses are Yoma Zarni, Yoma Swaninn, Toe Yadanar, King Star Express buses to Sittwe and Ann Yoma, Yoma Thitsar, Thukhitar, Ye Aunglan, Toe Yadanar, Dwarawaddy, Man Thitsar, Kyan Taing Aung, Aung Thitsar, Anauk Yoma, Yoma Zarni to Taung Goat.

All photos taken by Flintz. You can visit his photo stream at Flickr at Flintz.

One Reply to “Mrauk U, the old capital of Rakhine (Arakanese) Kingdom”