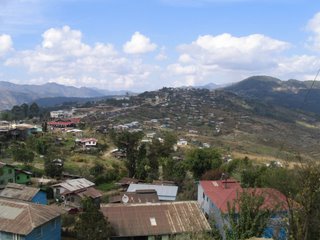 
Most of the population is Chin with a few Burmese. Most are Christians. Daily language of communication is Chin although Myanmar(Burmese) remains the official language.

As the city is located on the side of a mountain, the scenery is very beautiful. On one side of the city is a large mountain shadowing the city, while on the other side is a range of mountains running miles after miles. In the rainy season and in winter, clouds cover most of the lower parts of the city, so the city looks like it is built on the clouds. It also looks like a big lake is surrounding the city. It is quite cold during the winter months. Sometimes, the temperature drops to as low as minus two degree Celsius. And is it also very windy in Winter. The whole city is foggy in the morning and in the evening. The weather is excruciatingly cold. So be careful to carry a lot of warm clothes if you intend to travel to Hakha during winter. 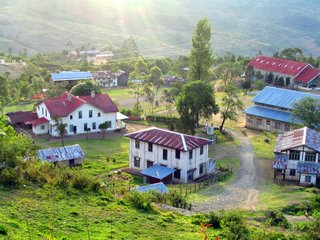 To travel to Hakha, you can either take a bus from Mandalay directly or first go to Kalay and then take a bus from there. The bus from Mandalay leaves everyday, except Sunday, but it takes about 24 hours to Hakha. The bus is quite cramp and small, and packs a lot of things under the seats as well as over the roof. Two buses leave Kalay everyday to Hakha, and it takes about 12 hours to reach Hakha. On the way you will pass the famous Manipur River and Bridge, which is very beautiful, and also Phalam, which is another town in Northern Chin State. I think bus from Kalay, via Phalam, to Hakha is a better path, as it is more exciting and the scenery is a lot more beautiful. 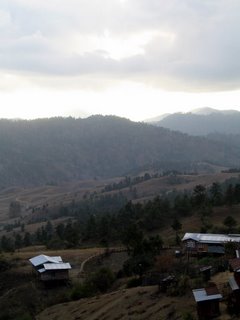 In Hakha, there is only one guesthouse, Zwe Guest House. It is quite close to the high way bus station. The guest house is quite cheap, but very clean and tidy. The owner is also very nice and friendly.

There are 3 or 4 nice restaurants in Hakha. A tea shop closed to the guesthouse, Yangon Teashop, sells good tea and fried rice, so it is a good place if you want to have dinner late at night but don’t want to walk too far.

There is no public transportation in Hakha, but it is possible to hire a motorcycle. Ask the guest house for help.

While in Hakha, don’t forget to visit the main market. Although small in size, there are a lot of chin traditional clothes and bags. They are quite cheap for their good quality and beautiful design. Always bargain before buying. But please remember that people in the region are quite poor, the the clothes have to be made by hand for quite a long time, so even if you don’t bargain, it is still cheap. And they usually don’t ask for a very high price.

Contributed by Bamarlay. First posted at in Myanmar Man’s Diary.